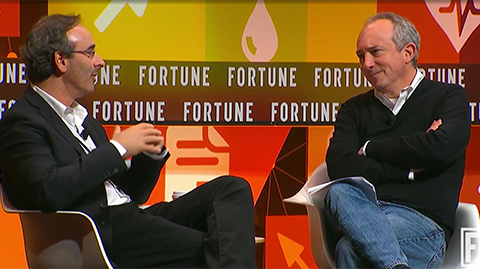 In order to treat cancer successfully, doctors need data—but they need data about several things.
And that’s what’s missing from today’s medical research system, according to Eric Lefkofsky, co-founder and CEO of Tempus, a startup aiming to establish databases to fine-tune cancer treatment.

There’s no shortage of patient data out there, but there is a lack of sources that combine both genomic information with therapeutic data, Lefkofsky explained on Wednesday at the Fortune Brainstorm Health conference in San Diego.
“Gathering molecular data is one thing, but you also need clinical data. You need therapeutic and outcome response data,” Lefkofsky noted. That means aside from information about a patient’s DNA and RNA makeup, clinicians also should know which treatments they are on and how they are responding.

For example, if a researcher is looking at a group of breast cancer patients taking Herceptin, why does it work on 40%, but not on 60%? What else is going on with the patients who are not being helped? Are they diabetic? Are they on other drugs?

“If you were to go into any of the cancer centers and ask who took Herceptin over two years and how they did, they’d need a grant and at least 90 days,” he noted. “That’s the sort of data that should flow freely between researchers, clinicians, and others.”

Lefkofsky, who also co-founded Groupon, was personally motivated to start Tempus when his wife was diagnosed with breast cancer. As they sat in clinics, Lefkofsky said he realized that truck drivers often get better data about how to do their jobs than oncologists do. Far too often, he continued, they don’t have the data about how a given treatment works in a given cohort of patients.

The idea behind Tempus is to build a technology layer atop existing electronic medical record (EMR) and pathology systems to aggregate that data, scrub it, and feed the clean version back to each original source for validation and verification. But then the large aggregate data pool combining all the patient data can be used to find patterns between treatments and results.

“My goal is to get most people starting in oncology and then those working on neurological disorders to use our platform to collect data for analysis,” Lefkofsky said. “If you talk CRISPR and personalized vaccines, they all need this data.” (CRISPR refers to a modern gene editing technique that holds promise for treatments of various diseases.)