Prostate cancer could be ruled out with simple MRI scan which prevents 25,000 biopsies
Back to News
Previous Next 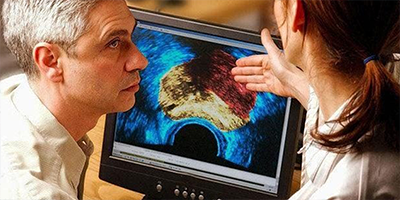 Prostate cancer could be ruled out with simple MRI scan which prevents 25,000 biopsies

Prostate cancer could be ruled out with a simple MRI scan and prevent one in four men needing an invasive biopsy, a new study shows.

Around 100,000 men are sent for a biopsy each year in Britain following blood tests which suggest prostate cancer might be present.

But many will not have an aggressive tumour – or cancer at all – and run the risk of developing sepsis or urinary problems through the unnecessary exploratory surgery.

Biopsies are also notoriously poor at detecting aggressive cancer, missing half of deadly cases and over-diagnosing in 25 per cent of cases.

Now a new study by University College London (UCL) and the Medical Research Council (MRC) has shown around 25,000 men could be spared a biopsy and needless treatment, if they were scanned first.

A trial of 576 men across 11 NHS hospitals found that scans could help one in four men avoid further treatment.

“Our current biopsy test can be inaccurate because the tissue samples are taken at random. This means it cannot confirm whether a cancer is aggressive or not and can miss aggressive cancers that are actually there.

“Because of this some men with no cancer or harmless cancers are sometimes given the wrong diagnosis and are then treated even though this offers no survival benefit and can often cause side effects.”

MRI scans can reveal the size of the tumour, how densely packed the cells are and how well it is connected to the blood stream, all of which indicate how aggressive the cancer is.

In the study, scanning correctly diagnosed almost all of the aggressive cancers (93 per cent), whereas biopsy correctly diagnosed only half 48 per cent, For men who had a negative MRI scan, nine out of 10 either had either no cancer or a harmless cancer, an accuracy rate far highter than surgery.

The National Institute of Health and Care Excellence (Nice) is currently rewriting guidelines for the diagnosis of prostate cancer and are expected to call for initial scans.

Men whose scans came back negative would instead be monitored by the doctors rather than undergoing surgery.

“We are searching for better ways to diagnose prostate cancer, the commonest cancer in men in the UK, since PSA alone is an imperfect test,” said Professor Ros Eeles, Professor of Prostate Cancer Genetics at The Institute of Cancer Research, London.

“This study provides ground breaking data that the addition of a multi parametric MRI can be used in the diagnostic pathway after PSA to better predict who would most benefit from prostate biopsy.

“An economic evaluation will now be needed to demonstrate if this method is cost-effective, and should be taken up as standard of care, since internationally MRI prior to prostate biopsy is not universally practised.”

The new study was published in The Lancet.